United Airlines released an announcement yesterday to purchase biojet fuel from AltAir Fuels. The announcement is a positive step for clean fuels in California, and proof positive that advanced biofuels are becoming commercially available. Yet in Sacramento, United continues to participate as a member of an oil-industry lobby group that is undermining California’s Low Carbon Fuel Standard, a regulation that would further expand clean fuels across the industry. 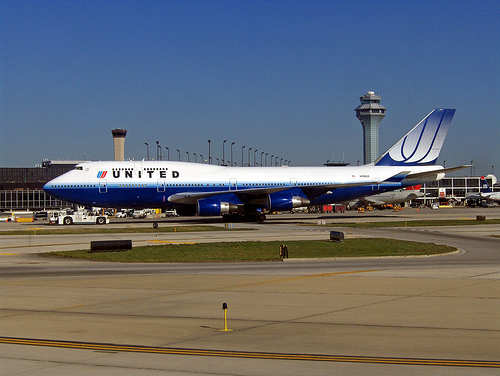 There are plenty of positive upsides to yesterday’s announcement by United Airlines. The historic milestone is a purchase agreement for AltAir Fuels, who will produce the fuel at a retrofitted petroleum refinery in Los Angeles. The fuel will supply flights out of Los Angeles International Airport beginning in 2014. The three-year contract calls for the purchase of 15 million gallons of fuel annually, starting with 5 million gallons next year. The purchase will be about half of the anticipated output of the refinery, with the option to purchase more.

Other good news includes United’s report that they will purchase the advanced biofuel at a price competitive with petroleum based jet fuel. The project is already financed, no doubt at competitive interest rates buoyed by the United agreement.

The announcement shows that some California refiners stand to benefit from increasing their flexibility by diversifying beyond crude oil. In fact, the facility involved in the deal will utilize idled refining equipment, demonstrating that advanced fuels can give new life and longevity to refining jobs.

AltAir plans to incorporate Roundtable on Sustainable Biomaterials sustainability standards. Hopefully AltAir will pursue this certification as soon as possible, ensuring that feedstock sourcing and production decisions can protect biodiversity, water and air quality. As the most credible certification system for biofuel sourcing, this process can put important environmental safeguards in play at a crucial time for the production scale up. Plans call for jet and diesel fuel to be produced from non-edible oils and agricultural waste, thereby avoiding competition with food production.

Since United began test flights on biofuels in 2011, the company has been seeking a cost-competitive, renewable option to fossil fuels. Last year United was one of the founding organizations of the Midwest Aviation Sustainable Biofuels Initiative, which promotes the build out of an advanced biofuel supply chain in the Midwest.

Unfortunately, United’s work to undermine statewide advanced fuels incentives in Sacramento compromises its best efforts outside the policy arena. United’s Director of Corporate and Government Affairs in the Western Region sits on the Board of Fueling California, a lobby group working to weaken California’s Global Warming Solutions Act (AB32), including the State’s Low Carbon Fuel Standard. The President and CEO of Fueling California formerly worked for United as Managing Director of Strategic Sourcing for Fuels, and has been campaigning to “hit the pause button” on California’s landmark energy policy.

Regardless of United’s disjointed endeavors that are simultaneously hurting alternative fuels policies while encouraging this project and grow alternative fuel options, this is also a positive step for the military’s Defense Advanced Research Projects Agency. DARPA provided a grant to UOP to develop the Honeywell process technology that will be utilized for the jet fuel production by AltAir.

As a fully funded project, using idled capacity, RSB sourcing principles, process technology supported by grants from the military and a credible customer, there are a lot of great economic and environmental stories to tell here, but one project won’t provide the abundance of alternatives we need to revolutionize the fuel market. If United is truly committed to developing clean fuels, it should examine its position on policy matters and fully support biofuel production across the industry.

« At Propel’s clean fuel stations, drivers can ‘fill ’er up!’
An Abundance of Alternatives »
For more on how clean energy is creating jobs and fueling economic growth across the country, see E2's new website: