By Carlin Rosengarten and Jeff Benzak

At its algae farm in the high desert of southwest New Mexico, San Diego-based Sapphire Energy is helping to change the way America’s fuels are produced. And recently, one of the largest petroleum companies in the world signed on as its first commercial customer. 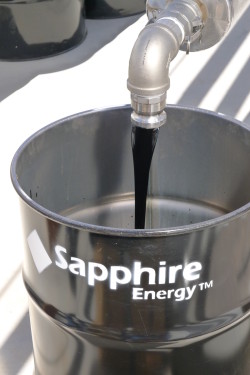 Sapphire Energy produces algal-based crude oil that can be blended with traditional crude oil and then refined into transportation fuels. In March 2013, Sapphire signed a deal to supply Tesoro, a major oil refiner and retailer, with “green crude.”

Sapphire’s Columbus, N.M., integrated algal biorefinery, dubbed the “Green Crude Farm,” consists of neat rows of one- and two-acre acre ponds, as well as algae harvesting and extraction equipment. Sapphire cultivates algae in the ponds, collects the prolific plants, and then extracts “green crude” oil from the organic matter.

Refiners can then take this crude, blend it with traditional crude oil, and produce fuel.

In March 2013, a subsidiary of the oil refining and retailing giant Tesoro signed a deal with Sapphire to purchase an undisclosed amount of “green crude” oil for refining into fuel. In a statement, Sapphire CEO Cynthia Warner underscored the significance of the deal.

“In less than one year, Sapphire Energy has started up its commercial demonstration to grow algae; has produced crude oil from our farm; and now, with Tesoro as our first commercial customer, we’re providing barrels of our oil to be refined for market use,” Warner said. “This moment is enormously important for the industry as it validates the benefits and advantages of [our] crude, and confirms its place as a market-viable, refiner-ready, renewable crude oil solution.”

The partnership with Tesoro could potentially help supply clean energy to meet the demand created by new fuel standards, including California’s Low Carbon Fuel Standard (LCFS). The LCFS requires a 10 percent reduction in the carbon intensity of California’s transportation fuels by 2020.

“Tesoro is continuously looking at new technologies for producing renewable fuels,” Joel Larkins, Tesoro’s vice president of renewable development, said in a statement. “We are pleased to be a purchaser of Sapphire Energy’s Green Crude, which shows promise as an alternative fuel solution.”

Along with deals like the one with Tesoro, Sapphire has grown by leveraging its private funding with a $50 million grant from the U.S. Department of Energy and a $54.4 million bank loan guaranteed by the U.S. Department of Agriculture. Because of this public-private partnership, construction of Sapphire’s “Green Crude Farm” created more than 630 full-time construction jobs.

Later this year, Sapphire plans to expand the refinery’s production and extraction capacity. It expects to complete the expansion by 2014, with the production rate of its crude growing to 100 barrels per day.

“Without the government partnership, it’s hard to imagine that a project of this magnitude could move forward,” said Tim Zenk, Sapphire’s vice president of corporate affairs.

“Sapphire Energy is well on its way to making algae crude oil a viable alternative fuel solution for our nation, and now with Tesoro on board, which as far as we know is a first between a refiner and algae producer, we’re one step closer,” Zenk said. “Moving forward, our focus is on refining our technology and increasing yield as we bring algae production to commercial scale.”

Slider photo: The harvest system at Sapphire’s “Green Crude Farm” undergoes a shakedown process to confirm the viability of the demonstration algae farm.

« Tesoro is first customer for Sapphire’s algae-derived crude oil
Filling up on algae-based diesel »
For more on how clean energy is creating jobs and fueling economic growth across the country, see E2's new website: