The Economic Benefits of Military Biofuels 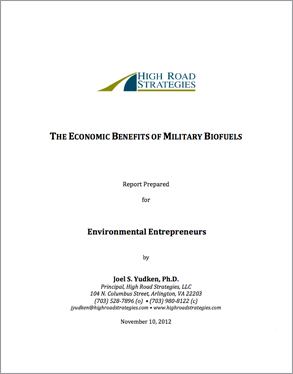 E2 supports the development of an American advanced biofuels industry as a key component of a clean energy economy. We are tracking the growth in this sector, and supporting federal policies to enhance biofuels expansion, including the biofuel targets set by the U.S. Department of Defense, (DoD).

DoD has set aggressive goals for incorporating advanced biofuels into the Air Force and Navy fuel mix to enhance mission capacity and security. At the same time, the military’s biofuel requirements create an important market signal for the growth of the industry.

E2 commissioned a study to assess the impact of DoD’s biofuels investments and demand signal on the growth of domestic clean fuels production and the potential economic benefits to the U.S. economy. The report found that the value chain of the nascent biofuels industry in response to these military targets will create thousands of jobs and billions of dollars in new revenue, especially in states or regions with biorefineries.

The impacts of the military’s biofuel strategy transcend the defense market by attracting private capital into technology development and biorefinery construction, accelerating the scale up and deployment of biofuels. Biofuels will become increasingly cost competitive as production volume increases, providing clean fuel choices for the civilian sector, particularly in the commercial aviation industry… Read full report »