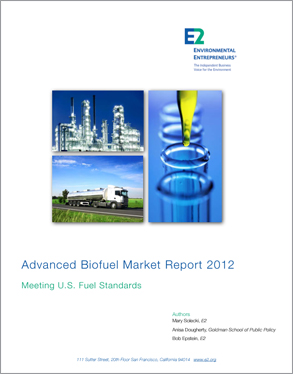 Advanced biofuels are renewable, liquid transportation fuels that can replace traditional gasoline and diesel with significantly lower greenhouse gas (GHG) emissions. With more certainty of the policies discussed in this report, these fuels could be produced at scale and compete on a cost basis.

In the year since E2’s 2011 Advanced Biofuel Market Re- port1 the industry made significant advances in the pro- duction of fuels. U.S. and Canadian production capacity expanded from 437 million gallons in 2011 to over 685 million gallons in 2012. We identified 165 companies ac- tive in the production of advanced biofuels along with 82 companies involved in the supply chain by providing necessary feedstock, technology, and infrastructure.

Our purpose in producing these annual reports is to compare industry production growth to the future de- mand for low carbon fuels created by U.S. policies like the Renewable Fuel Standard (RFS2), California’s Low Carbon Fuel Standard (LCFS), federal funding programs, tax incentives, and more. While this report looks at many policies and programs, E2 has special interest in the LCFS for its ability to spur innovation, fuel neutrality, and its sustainability standards that minimize conflicts with food production. The LCFS requires that, by 2020, blenders, refineries, importers and distributors of trans- portation fuels reduce the carbon intensity (CI) of the fu- els they sell by ten percent below a 2010 gasoline and diesel baseline.

The advanced biofuels industry has sufficient, proven technology to meet the LCFS requirements, and with sufficient market certainty, can meet the overall RFS2 targets. The risks for delivering fuel are regulatory cer- tainty and production capacity. We use two methods to examine future production capacity. Method one docu- ments the status of production facilities within the U.S. and Canada. Method two collects forecasts from active companies delivered through publicly available sources. Wherever possible, we verify the forecast via direct con- tact with the company. If we cannot verify the forecast or if we have reason to doubt the accuracy of the forecast, then we assume no production will occur. Method one shows a low-end total domestic production capacity of 1.6 billion gallons by 2015. Method two shows a high- end capacity of about 2.6 billion gallons by 2015… Read full report »

« The Economic Benefits of Military Biofuels
Support for locally produced biofuels crucial »
For more on how clean energy is creating jobs and fueling economic growth across the country, see E2's new website: