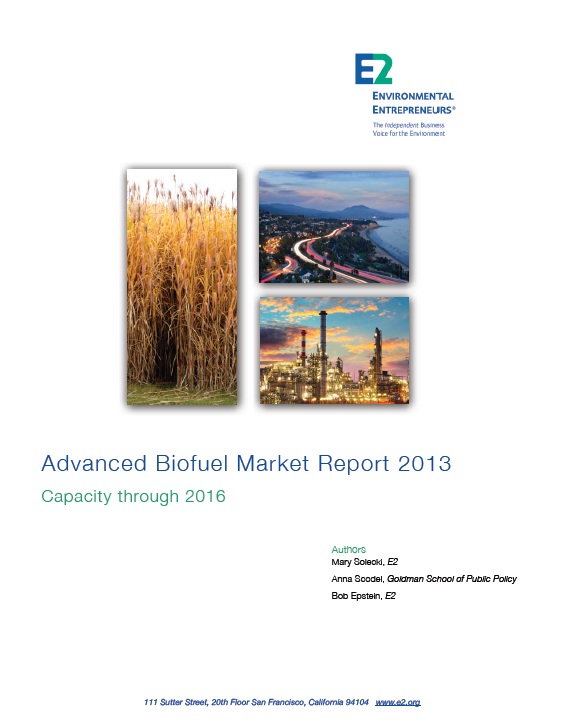 Environmental Entrepreneurs’ (E2) annual assessment of the advanced biofuel industry shows steady improvements in technology and production capacity, and concludes that there will be sufficient supply of advanced biofuels to meet the federal Renewable Fuel Standard through 2016. The report comes amidst renewed scrutiny of the RFS from Congress this summer, as the oil industry and other interest groups seek to roll back the renewable fuel requirements.

The RFS requires that the majority of future growth in biofuels production come from non-food cellulosic biofuels, and the slower than expected commercialization of the cellulosic industry has caused some to lose patience with the program. E2’s report suggests that the policy is beginning to deliver on its stated purpose of developing a domestically produced, clean-burning alternative to oil.

“The advanced biofuels industry continues to grow, despite a persistently challenging financial climate,” said report co-author Mary Solecki, who runs the E2 Clean Fuels Program. “A number of commercial scale operations are online with many more to come, providing further evidence that the RFS, if implemented properly, can work to drive the production of clean, low carbon fuels.”

To qualify as advanced for the E2 report, a biofuel must deliver at least a 50 percent reduction in carbon intensity compared to petroleum using calculations developed by the California Air Resources Board. Biodiesel remains the dominant advanced biofuel today and is expected to remain the forerunner through 2016. So-called “drop-in” fuels show significant progress and the report authors expect them to contribute more substantially to overall advanced biofuel capacity over time.

“Our research suggests there is real potential for advanced biofuels to continue to scale up,” Solecki said. “New investments and regulatory certainty will help ensure the successful commercialization of these projects.”

The Environmental Protection Agency, which administers the RFS, is expected to announce biofuel volume requirements for 2014 sometime over the next month. And while the report shows that the biofuels industry can meet near-term production targets, even under the best circumstances, advanced biofuels can account for only 0.7 percent of U.S. fuel demand – suggesting that while biofuels can be part of efforts to cut oil use, they must be paired with other solutions such as expended electric vehicle use and greater fuel efficiency.