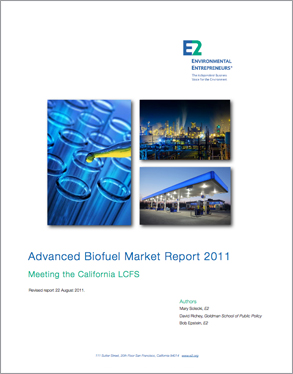 with significantly lower greenhouse gas (GHG) emissions.1 This report collects data from a variety of public sources and private interviews for the purpose of summarizing current economic activities in the advanced biofuel industry.

California enacted the Low Carbon Fuel Standard (LCFS) regulation in 2007 as part of the Global Warming Solutions Act of 2006 (known as AB 32). The LCFS requires that, by 2020, blenders, refineries, importers and distributors of transportation fuels reduce the “carbon intensity” (CI) of the fuels they sell by ten percent below a 2006 gasoline and diesel baseline. While the LCFS will be achieved with a variety of alternative fuels including electricity and natural gas, this report examines the ability to meet the reduction target only through the use of advanced biofuels in gasoline and diesel vehicles.

This report does not claim nor is it designed to prove that the private sector will produce 2.4 billion gallons (gasoline equivalent) of advanced biofuel for the California market. Rather it provides evidence that the combination of market forces and public policies has put the advanced biofuel technology and industry in the United States on a path where it should be able to produce a significant amount of low-carbon fuel in the next few years, thereby making it possible to deliver sufficient fuel to meet the California LCFS… Read full report »

« Pew Trust on Advanced Biofuels
The Economic Benefits of Military Biofuels »
For more on how clean energy is creating jobs and fueling economic growth across the country, see E2's new website: