Sometimes technologies that have the potential to transform global industries have their genesis in humble settings. And in the case of a California-based energy company called Sylvatex, a makeshift lab in a two-car garage in Eugene, Ore., is where a new fuel technology was launched.

Sylvatex has developed a way to combine vegetable oils and other renewable liquids with ethanol and tiny water bubbles to form a “micro-emulsion” fuel additive. When blended with diesel, this additive results in a cleaner-burning fuel and improved engine performance.

If California successfully implements its Low Carbon Fuels Standard, or LCFS, it’s a fuel technology that could be in high demand, said Virginia Klausmeier, the CEO of Sylvatex. 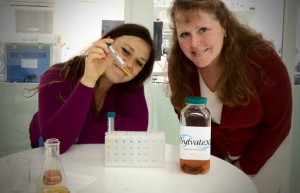 “We think of it as a market opportunity,” she said of the LCFS. “As the market grows, jobs will come with that. But there has to be a market that we can forecast before we start scaling up and do more hiring.”

Thinking big is in the company’s DNA. Sylvatex was founded by Klausmeier’s father, Dr. William Klausmeier, a chemist who died of pancreatic cancer just before Christmas of 2008. After living in Thailand and other foreign countries, Dr. Klausmeier moved with his family to Eugene, where he was a professor at Lane Community College.

After work he’d come home and tinker in his garage lab. It’s there that he developed the fuel technology that forms the foundation of Sylvatex’s business.

“He was definitely the inventor of the technology, and the main driver behind the idea,” said Klausmeier, who often worked alongside her dad. “He had seen the effects of pollution in Thailand, and he understood that there was a big market for a cleaner diesel. He was very focused on global solutions.”

When blended with petroleum-based transportation fuels, Sylvatex’s product can help reduce air-polluting engine emissions like particulate matter by 25-78 percent and cut nitric oxide by up to 13 percent. An additional environmental benefit comes from a reduction in the carbon content of diesel fuels that incorporate Sylvatex’s blend.

Klausmeier said her company will initially sell its “SmartDiesel” product at low volumes to public and private partners in California. Once it establishes a foothold in California’s wholesale diesel market – which Klausmeier estimates is worth more than $11 billion in 2013 alone – Sylvatex will set its sights on licensing its technology to the domestic market and, eventually, the international market.

Klausmeier said Sylvatex can help fuel refiners and distributors meet standards like California’s LCFS in a simple, cost-effective way. She said that one of the main advantages of Sylvatex’s business model is that its clean, renewable additive can be adapted without the major capital expenditures that come with infrastructure overhauls. For example, Sylvatex can license its proprietary fuel technology to oil refiners, who can then insert the additives into their blend using existing infrastructure.

Klasumeier said her father’s passing compelled her to leave her job at a Fortune 500 medical device company to become an entrepreneur and to continue to innovate new fuel technologies. She said the rest of the team at Sylvatex has coalesced around Dr. Klausmeier’s vision – that the world needs clean fuel technologies that transform industries but simultaneously work within existing infrastructure.

“We have a big opportunity,” Klausmeier said. “I knew what he had started was a big deal. Once he passed away the team rallied.”

SLIDER IMAGE: Sylvatex CEO Virginia Klausmeier, left, and chief technology officer Kristen Aramthanapon in May 2012 during a demonstration of a Sylvatex-powered truck owned by the city of Sunnyvale, Calif. Sylvatex partnered with the city in a pilot program for Sylvatex’s clean-burning SmartDiesel blend. CREDIT: Sylvatex

« Support for locally produced biofuels crucial
2013 looks to be a strong year for biofuels »
For more on how clean energy is creating jobs and fueling economic growth across the country, see E2's new website: