When people visit Sierra Energy’s gasification facility at a mothballed Air Force base in California, they like to play a guessing game. The game is based on a simple question: Can you gasify that? Usually, the answer is yes.

Sierra Energy is a waste gasification company founded in 2004 in Davis, Calif., by entrepreneur Mike Hart. Along with a team of engineers, Hart, 50, has developed a machine called a gasifier – essentially a blast furnace the size of a telephone booth.

Devices such as Sierra’s gasifier are indicative of the type of back-to-the-future technologies that are being created today in response to expected increases in demand for clean fuels as California rolls out its groundbreaking low-carbon fuels standard. 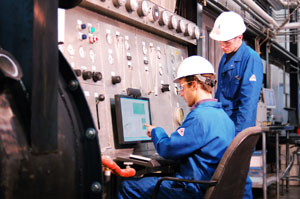 After it’s produced and captured, syngas has multiple applications. It can be combusted to generate electricity, converted into liquid transportation fuels like diesel, or used to power hydrogen fuel cells.

Practically anything can be gasified – a fact that amazes visitors who tour the plant.

“When they come by they’ll ask me what we can gasify: ‘Can you gasify a bowling ball?’” Hart said. “And I’ll say, ‘Yep, we can gasify that.’ Radioactive waste is about the only thing we can’t put into the gasifier.”

One part tried-and-true industrial blast-furnace technology, one part cutting-edge clean energy technology, the gasifier heats trash to 4,000 degrees. By closely controlling oxygen levels, the trash does not ignite, minimizing the production of emissions.

Biofuels proponents have touted syngas production as an important component of market-based energy policies designed to improve the environment and economy by reducing emissions. Sierra Energy, for instance, could benefit from California’s Low Carbon Fuel Standard Program, or LCFS, because it encourages polluting companies to adopt renewable alternatives, like Sierra Energy’s waste gasifier, in order to offset the use of fossil fuels and lower their carbon footprints to meet new government standards. 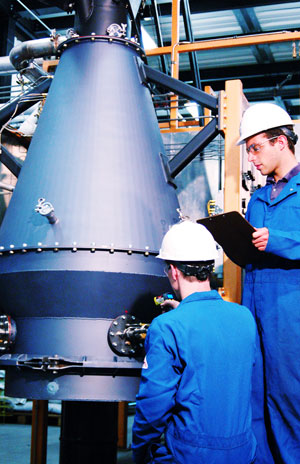 LCFS encourages clean tech innovation and drives investment into the sector, Hart said. Sierra Energy aims to grow along with the industry, expanding production and hiring more employees. Currently, 12 full-time people work at Sierra Energy; several are engineers who have ties to the University of California-Davis.

Already, more than 200 businesses have expressed interest in purchasing Sierra Energy’s gasifier, Hart said. The cost of a small-scale, turnkey system starts at $3 million and then varies according to size and project parameters. Currently, only one Sierra Energy gasifier is in use – the demonstration model at the former Air Force base – but the U.S. Army has agreed to purchase one for Fort Hunter Liggett, a training base in Monterey County, Calif., with a stated “Net-Zero” mission to produce as much energy as it consumes, with zero waste leaving the facility.

On the base, Sierra Energy’s gasifier will take any unrecyclable waste and turn it into electricity to power the base’s operations.

“This project is part of Fort Hunter Ligget’s ongoing efforts to meet Net-Zero standards for both waste and energy,” Col. Donna Williams, the garrison’s commander, said in a statement. “Disposing of the installation’s waste and using it to generate clean energy meets both of these goals.”

Like a gasifier that could be used by any other institution, business, or municipality, the Army’s gasifier will redirect trash otherwise destined for landfills. This helps reduce emissions of methane, a greenhouse gas.

There are more than 50,000 landfills across the country – 48,000 are abandoned and another 2,000 remain open, Hart said. According to the Environmental Protection Agency, landfills are the third-leading source of human-caused methane emissions in the United States, accounting for 17 percent of all U.S. methane emissions in 2009.

Landfills are also constantly at risk of leakage, which puts precious groundwater resources at risk, Hart said, adding that Sierra’s technology could be used to mine those abandoned landfills, thereby recovering the recyclable materials, protecting the water table, and reclaiming the land.

Entities with large waste removal and landfill expenses are Sierra Energy’s target customers. By purchasing one of Sierra Energy’s gasifiers, they could generate more than 20 percent annual return on their investment, making their money back in four or five years, on top of all the environmental benefits, Hart said.

“What we’ve done is taken one of the oldest polluting technologies and turned it into a cutting-edge clean technology,” he said. “And that’s an amazing opportunity.”