From A to ZeaChem: Biorefinery creating jobs, new markets in Oregon and beyond

When advanced biofuel manufacturer ZeaChem decided to construct a new biorefinery, it searched for a site that could grow with the company. Eventually, ZeaChem chose a small town along the banks of the Columbia River – Boardman, Oregon.

Home to about 3,200 people, Boardman offers ZeaChem access to Union Pacific rail lines, river barges, an interstate, and abundant agricultural resources that can be refined into cellulosic ethanol without interfering with food supplies, such as sustainably farmed poplar trees and wheat straw.

And for the people of Boardman, ZeaChem means jobs.

“For a small, rural community like Boardman, the potential to create hundreds of jobs is a significant impact to the local community, and the benefits extend throughout the state and the region,” said Carrie Atiyeh, public affairs director of ZeaChem. 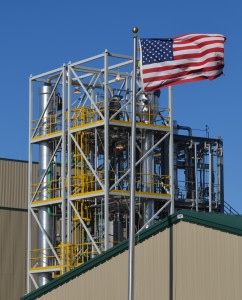 Advanced biofuels create American jobs and grow the domestic economy. ZeaChem’s fuels can be sourced, produced, and distributed in Oregon.

With the implementation of low-carbon fuel standards in states like California and Oregon, communities like Boardman can expect to see more advanced biofuel businesses building out more refineries that are hiring more workers. According to a study by Environmental Entrepreneurs, 26 new biorefineries could come online by 2015, creating more than 18,000 new jobs.

This facility has the capacity to produce about 250,000 gallons of advanced biofuel annually.

“I’m proud … of the Oregonians who helped build and operate this plant,” said Sen. Ron Wyden (D-Ore.) during a visit to the Boardman biorefinery in spring 2012. “The success of this biorefinery is a perfect example of how Oregon is helping to lead our nation towards less reliance on fossil fuels while creating jobs in our rural areas.”

Already, ZeaChem, which is headquartered in Colorado and runs a lab in California’s Silicon Valley, is planning to expand its Boardman operations. In 2014, the company plans to construct a much larger, commercial-scale biorefinery next door to the one completed last year. The new refinery will create 200 construction jobs and 65 full-time operations jobs, and will produce 25 million gallons of advanced biofuel. 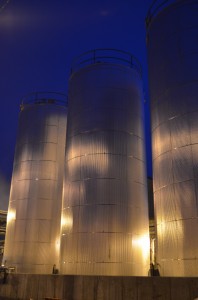 ZeaChem’s Oregon biorefineries will produce advanced biofuels that give consumers more choice at the pump, as well as bio-chemicals that can be used in everyday consumer products.

ZeaChem will produce its cellulosic ethanol from a combination of two feedstocks. The first, woody biomass, will be sourced from a long-term agreement with GreenWood Resources, a company that works in partnership with the U.S. Department of Agriculture and manages an existing 28,000-acre tree farm located just five miles from ZeaChem’s facility.

This tree farm, or plantation, is not native and natural forestland. Instead, it consists of long, neat rows of practically identical trees that are planted, grown, and harvested specifically for commercial use. Many of the trees ZeaChem uses are poplars, which are columnar in shape with smooth bark and leaves that turn yellow in autumn. Harvested every two to three years, these trees quickly regrow at the stump and help ensure a steady supply of cost-efficient feedstock for ZeaChem’s advanced biofuel refining operations.

ZeaChem’s secondary feedstock is agricultural waste generated when harvesting wheat. With 200,000 acres of farmland (an area about a quarter the size of Rhode Island) located within a 40-mile radius of Boardman, ZeaChem can utilize crop waste that has little value to farmers and does not interfere with the food supply. This keeps most of ZeaChem’s value chain close to the site where the fuel is produced.

“By co-locating our production facilities with feedstock supplies, we ensure the use of local resources to produce these products in the same community,” Atiyeh said. “The Clean Fuels Program (in Oregon) drives demand for our products at the local and state level. So you have all three legs of the stool if you will – biomass, conversion, and consumption – all happening in the state and keeping the investment dollars in Oregon throughout the value chain.”

ZeaChem’s made-in-Oregon product is a direct replacement for petroleum-based products, and it’s a mature technology that will be cost-competitive with $50-per-barrel oil. What’s more, ZeaChem’s fuel produces more than 90-percent fewer emissions than conventional gasoline.

ZeaChem’s cellulosic ethanol will be blended into gasoline for use in conventional cars, as well as higher ethanol blends that run flex-fuel vehicles. Bio-based chemicals produced by ZeaChem will be used in paints, consumer goods, and other applications.

One partner is Procter&Gamble, which is seeking to use biomass-based chemicals to produce and package its personal and household goods. And in the automotive sector, ZeaChem announced an agreement with Chrysler in 2011. In the agreement, the automaker stated its commitment to promoting alternative fuels and manufacturing vehicles capable of running on higher ethanol blends, such as E85, which is 85 percent ethanol and 15 percent gasoline.

Regardless of its end use, the advanced biofuel ZeaChem produces is helping to grow a new, clean energy industry that’s expanding economic opportunities in the Pacific Northwest.