Bloomberg’s report “Chevron defies California on carbon emissions” hit the nail on the head when it comes to campaigns against the Low Carbon Fuel Standard: short-term profits often come at the expense of smart policies that can expand our state’s economy and meet our long term energy needs. 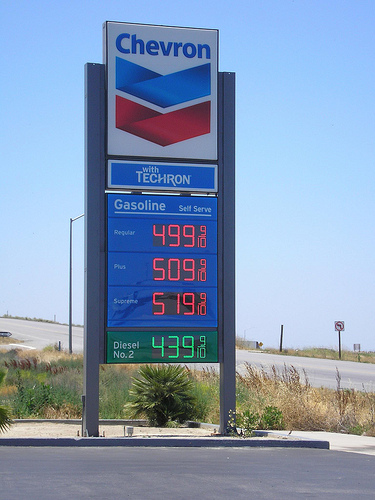 As explained in the Bloomberg article, Chevron has cut R&D funds for advanced biofuels while scaling up its attempts to dismantle our clean fuels law. The law was put in place in 2010 to help grow our economy and clear our air, and companies like Chevron had seats at the table when the law was written. But around the same time the law was being hammered out, Chevron decided the profit margins of its nascent advanced biofuels project, Catchlight Energy, were not high enough, and it divested in its operations.

Chevron has every right to fund its own operations as it sees fit. They also deserve credit for their agreement to purchase the fuel produced by KiOR, which is great news for both companies. But it’s a distant second to their previous renewable energy investments through Catchlight Energy, a biomass to fuel project. While the 5-10 percent margins of Catchlight may not have been huge, the technology would help Chevron meet its compliance obligation to the LCFS, put some dollars behind their marketing claims of investing in renewables, and been a step toward the clean energy future California demands.

Fueling California has organized two events asking for a dialogue about how to enhance or fix the LCFS. But attendees at both events came out with the feeling that this is a concerted attack on the program, not a dialogue about enhancements. Most steering committee members did not even attend the second Fueling California event, but Chevron did bring in unprecedented executive-level representation. Worst of all, Fueling California claims that participants reached consensus about necessary fixes to the program, when in reality the discussion sparked divergent viewpoints and a debate with no clear winner.

Fueling California lobbyists visit legislative and administrative offices, where they push their flawed reports, op-eds and “consensus building” events. It’s no surprise that California legislators have been raising an eyebrow of alarm at the LCFS, since they are hearing concerns from what seems like many directions. But in reality, all stem from the same source.

State officials tasked with protecting the state from gas price spikes and growing the economy want to make sure that policies are sensible and attainable. Although they hear a lot from LCFS opponents, they need to hear more about the policy’s many benefits.

They need to know that some renewable fuels under development will provide a new product for refineries to blend, a renewable product that will last long after our fossil fuels have run out. For example, Tesoro is purchasing Sapphire’s “green crude” for refining. This helps protect refinery jobs.

Californians should know the status of our domestic advanced biofuels industry, despite the David versus Goliath battle: companies are working hard at streamlining operations, innovating technologies, raising capital and scaling up to meet growing demand. They are across the country, and they are real. They are Sapphire Energy in New Mexico. They are ZeaChem in Oregon. They are KiOR in Mississippi.

That’s why we launched FuelingGrowth.org. We wanted to provide a face to the industry that shows just how many gallons of fuel, new refineries, and new jobs this industry is pumping into the market. We wanted to show that investments today will lead to new fuels we can depend on for decades and centuries to come.

« California plant prepares to restart, produce advanced biofuels
Florida sunshine fueling the growth of Algenol and its blue-green algae »
For more on how clean energy is creating jobs and fueling economic growth across the country, see E2's new website: