At Propel’s clean fuel stations, drivers can ‘fill ’er up!’

An old Valero gas station stood for years at a busy intersection in Fullerton, Calif. Across the street from a leafy park and next door to a shopping center, this rundown station pumped the only kind of fuel Californians have ever really known – petroleum-based fuels.

Last year, however, the old filling station was sold to a California-based renewable fuel retailer called Propel Fuels. At the intersection of Chapman and Raymond avenues, things began to change. Propel hired architects and construction workers to transform the station. The site was reinvented as a modern “Clean Mobility Center,” and now drivers in all sorts of different vehicles can fill up on fuels like E85 Flex Fuel or biodiesel sourced from domestic, renewable resources. 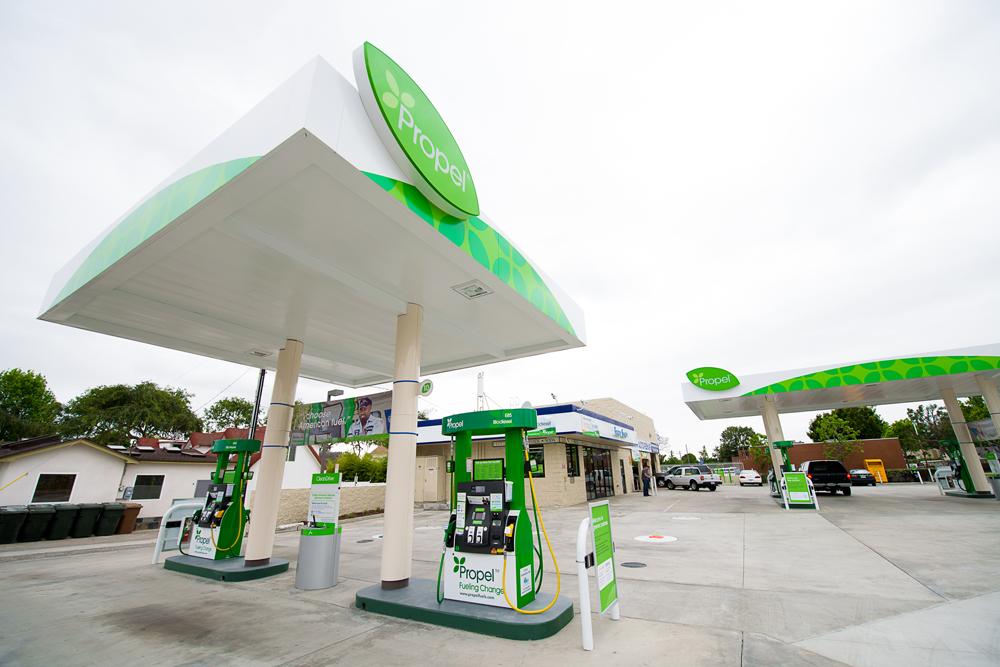 This is a significant development for Fullerton’s drivers. But it’s actually just a small part of a much larger shift happening in California. Thanks to the state’s Low Carbon Fuel Standard, or LCFS, drivers across the state are finally getting a real choice at the pump.

Petroleum’s century-old filling station monopoly is breaking up, and California’s economy is growing.

“The site was old and rundown,” said Matt Horton, Propel’s CEO. “Propel took over and reenergized the site. It’s now a very attractive site, and it’s now selling alternative fuels in a county which didn’t have alternative fuels before.”

The Fullerton station alone has cut CO2 emissions by 5 million pounds and counting. It’s just one of about 40 bright-green-and-white Propel stations located up and down the West Coast. Most are in California, though Propel operates stations in Washington as well.

Originally based in Seattle, Propel moved its headquarters to California in 2008. The company was attracted by policies like the LCFS.

“From our perspective, the LCFS is a great policy instrument,” Horton said. “It’s absolutely doing its job providing incentives that will transform the fuel industry. It lets the market decide what is the most cost-effective way to reduce our carbon emissions.”

The LCFS states that California’s biggest polluters must cut carbon pollution by 10 percent by 2020. Some lobbyists opposed to this standard have said it prevents investment from flowing into California. But Propel and one of its main venture-capital backers – Craton Equity Partners – provide strong financial evidence to the contrary.

As a venture capital firm, Craton seeks investments that are part of an imminent transformational shift in the marketplace. Known for its expertise in navigating regulatory frameworks, Craton sees opportunity in the LCFS by investing in companies like Propel.

Tom Soto, a managing partner and founder at Craton, said what’s happening in the fuels marketplace in California is a “tectonic” shift. “The next step in the evolution of fuel life is biofuels and alternative fuels,” he said.

Beyond generating investment in California, Propel puts people to work. The company has 20 full-time employees working in jobs like marketing, fuel supply logistics, permitting, real estate and customer service. Horton said he has dedicated employees who are enthusiastic about Propel’s clean fuel mission.

“Our employees are very important stakeholders.,” he said. “People are excited about their jobs and it’s a great opportunity in an industry primed for growth.”

Propel’s staff has helped more than 10,000 consumers move away from fossil fuels. The opportunity to choose what type of fuel you want to put in your vehicle has created a loyal customer base that includes everyone from mothers in minivans to construction workers in pickups. Propel’s customers have even built up a grassroots social media community.

“I believe it’s important to let consumers drive the change,” he said. “In any industry, consumers vote with their wallets.”